Get Me Roger Stone: Get Your Hate On!

Hey, all you angry progressive liberals, this is your film – to engage your rage. Hey, all you angry lovers of noble and decent democracy, this is your film – to reinforce your sense of injustice. Hey all you morally conscious idealists who imagine a level political field and fair play, get ready to get your hate on! And ALSO all you Republicans, and Libertarians, and you stubborn Trump-defenders: this film is full of quotable, self-satisfying defenses sure to infuriate your naïve, liberal friends who love to hate on you. There is something for every political animal in this movie. And animal may be the key word in that sentence. Because Get Me Roger Stone, a documentary directed by Morgan Pehme, Dylan Bank, and Daniel DiMauro, explores the ruthless beast of modern American politics (and its vicious political operatives, especially the notorious Roger Stone). And yet it’s also a bit of a fun romp. The film’s world premier is at the Tribeca 2017 Film Festival, and it debuts May 12 on Netflix. 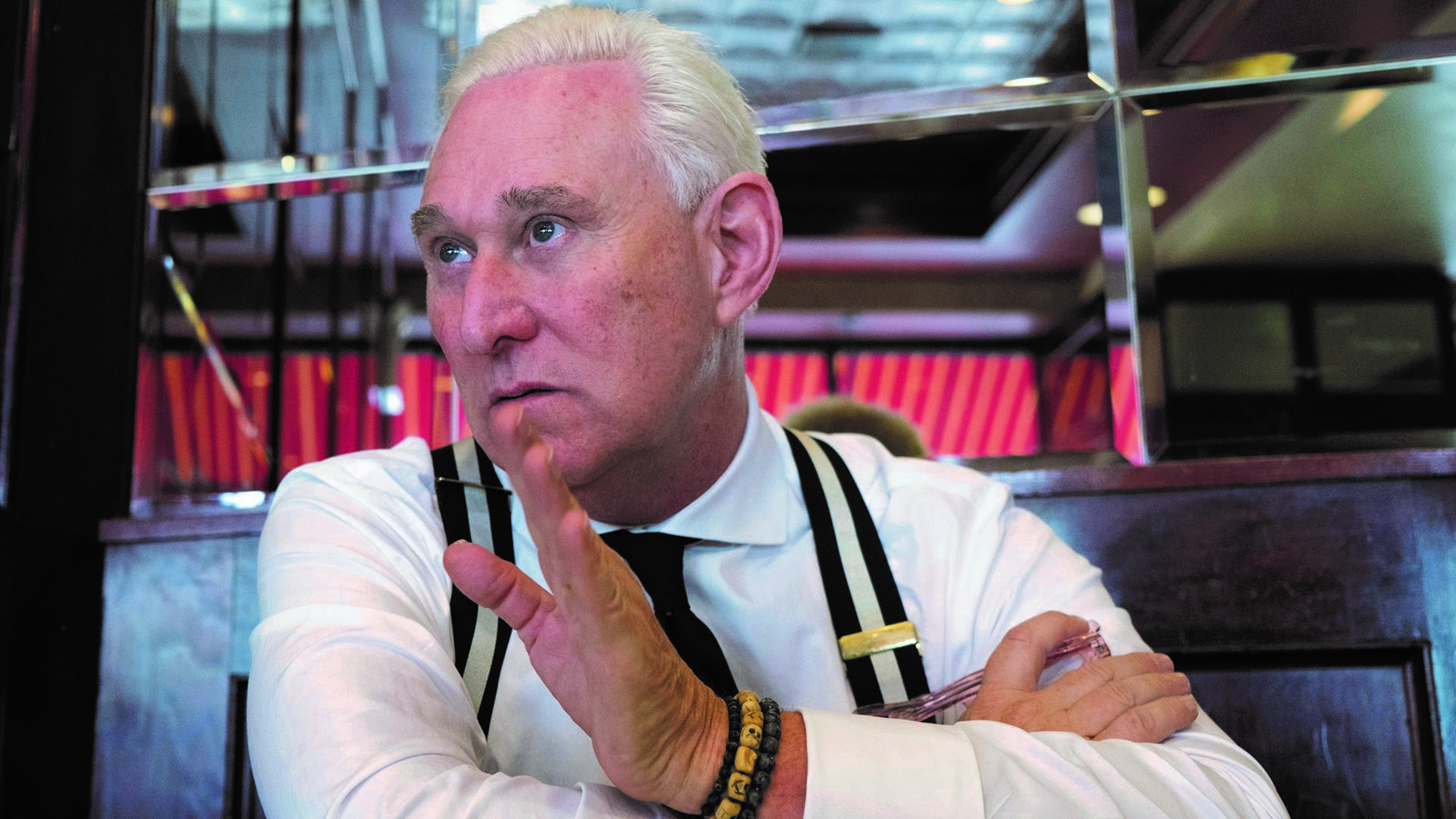 Calling Roger Stone a scoundrel would be like calling the Dalai Lama a nice guy. But be careful before you start getting outraged, because this guy LOVES to be hated. The film begins with Donald Trump giving his acceptance speech at the Republican National Convention (a scary-dark speech, according to many), where he assured America that only he alone could fix what was broken with the system. (“The American Dream is dead. But I will bring it back.”) And there is a shot of Roger Stone, sitting in the shadowy stage wings, watching, with a self-satisfied smile. Donald Trump has never seemed so naïve. After watching this movie, you actually might feel sorry for him. You think Trump was Putin’s puppet? Roger Stone insists he was the puppet master.

That’s what is “fun” about this film. It’s made by guys who Stone himself mocks as “liberal

filmmakers who can’t be trusted,” even as he cheerfully allows them to follow him around, and he sits down (posed theatrically beside a martini) and “confesses” all his delightfully evil doings. “I was a jockey looking for a horse,” Stone says, “and Trump was a prime piece of horseflesh.” Ouch. No wonder Trump finally fired him. Trump doesn’t like to be upstaged, and Roger Stone could steal the screen from Jack Nicholson and Robert Deniro combined. Someone in the film calls Stone a “bodybuilding dandy,” and that’s the least of it. Roger Stone puts the sin in sinister. (For a comprehensive guide to all of Roger Stone’s egregious acts, click here.)

In the film, we learn of Roger Stone’s associations with the likes of Richard Nixon, Ronald 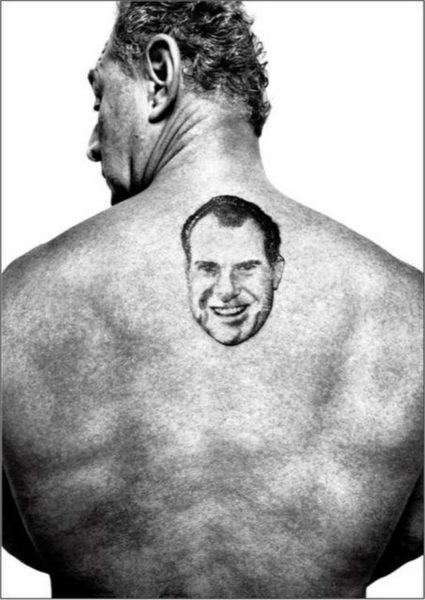 Reagan, Alex Jones, Paul Manafort and even the almost-iconic Roy Cohen, whose name is “synonymous with demagoguery, fear mongering, and intimidation.” Cohen was once Trump’s lawyer, btw, and he’s the one who introduced Stone to Trump. It was a match made in … heaven. (Stone would lobby for “hell,” just to increase the drama, but he personally is in paradise as the center of this movie.) He himself says, “Better to be infamous than never famous at all.” And someone else explains, “Roger Stone was a pure Roger Stone production.”

In the film, we hear Roger Stone called, “a sleaze ball,” a “malevolent Forrest Gump,” “evil,” soulless,” “reprehensible,” the original “dirty trickster,” “crazy and wrong and racist,” – all from respectable mouths. And every accusation is demonstrated and validated with rock-solid evidence from recent political history, including direct acknowledgements from some of his co-conspirators. And Stone is entirely unapologetic. Roger himself seems to delight in detailing his own, dark and nefarious power-plays. Its almost like he’s using this expose’ to further fuel his own mythology.

Still, there is no getting around what a truly malignant cancer this man’s life has been, and the serious damage he has done to America (even if you voted for Donald Trump). And this movie succinctly covers the timeline from when the Republican Party was known for its Eisenhower-esque straight-laced earnestness to the “new alt-right,” who fights dirty in order to win at all costs, and who believes that “morality is a synonym for weakness” and deserving of contempt. And there is Roger Stone, a part of every step along that vile timeline,” loving you for hating him for personally forging that trail, or so he wants you to believe. It is highly likely, or at least quite possible, that Roger was a mere leech, clinging to and sucking the blood from a much larger beast. (Or, if he’s right — and he has a successful track record, he’s a genius and we’re his lucky sucker-beneficiaries.)

I am reminded, for some reason, of Bob Dylan’s famous line:

“Everybody must get Stoned!”

In this film, Bob Dylan gets his wish. But overall, it’s a grim reality, and frightening, if you stop to think about it, and these filmmakers manage to make it watchable by playing on its inherent Hollywood charisma, which was of course crafted by Roger Stone himself. It’s a political documentary operating as a horror film (or is it the other way around?) And you even get to hear Roger enumerate what he has defined as the Four Stages of Fame, as well as his list of Roger’s Rules. And if you are at all holding onto any hope that the worst of Donald Trump were “misstatements” by him or “fake news” by others, it’s definitely worth watching this film that will very logically and convincingly cut away any sense of faith or hope that you have.

Not really worth paying $17 or more to see in the movie theater (as you’ve seen much of it play out recently on the TV news), but definitely watchable on Netflix. Have some booze handy, to help numb the pain, but I promise you that this film tells the story of a train wreck from which you will not look away. There are no suggestions for remedying the problem, only a bleak-to-the-point-of-absurdity view of the sad state of our union. At the least, it will give you lots of topics to talk about at the water cooler.

It’s not over yet. In today’s New Yorker, regular contributor Jeffrey Toobin, who is also interviewed extensively in the film Get Me Roger Stone, and contributes some of the most amusing comments, now writes a detailed article about the film and the Stone-Trump-Nixon connection. Helen’s review is Highly impulsive, but if you want the nitty gritty from an insider expert, click here to check out Toobin’s article.