The fresh batch of films coming out of Tribeca2017 seems to have a violent teenage psychopath every time you turn around. What turns our young men into crazy killers? At the same time as a slew of documentaries and true-life tales are depicting the courage and moral fortitude of actual young men around the world, responding to terrorism and war with bravery – going to extraordinary lengths to save lives, we get a bunch of “thriller” films that depict American young men as narcissistic psychopaths who revel in bloody violence. On one hand there is City of Ghosts, Dabka, and When God Sleeps, for starters – peace-seeking films about heroism abroad, and on the other is The Dinner, Super Dark Times, Sweet Virginia, and even The Gray State, all featuring violence-obsessed middle-class Americans. Is there a cultural connection? Helen is Highly contemplating the significance of this, while I write some short reviews of these Tribeca thrillers: 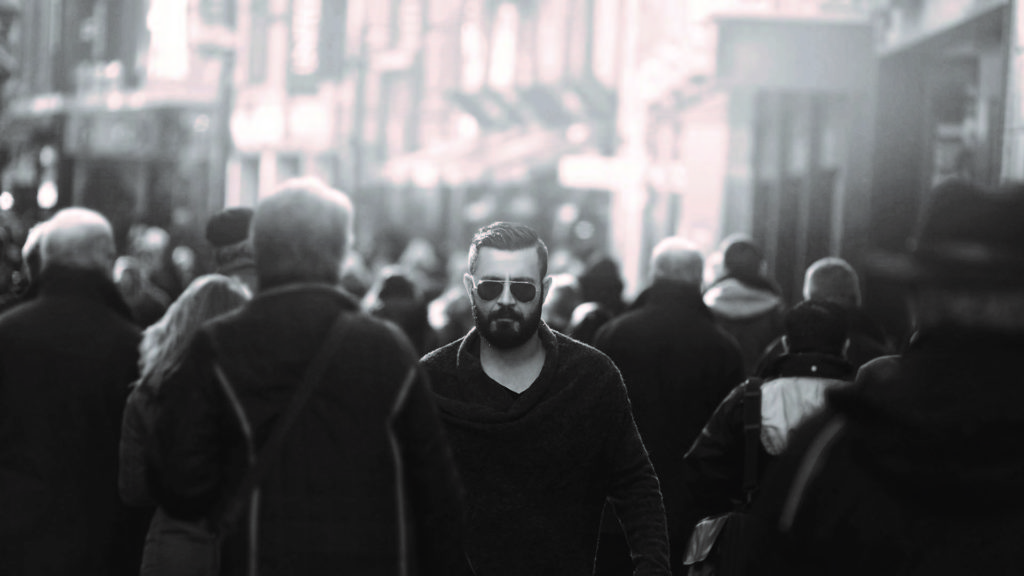 I’ll start with The Dinner, directed by Oren Moverman – an intelligent thriller, starring big-names Richard Gere and Laura Linney, which is a well-made, well-balanced film that is an adaptation of the Herman Koch bestseller (first published in the Netherlands in 2009 but now smoothly re-made into an all-American tale). The film begins as a kind of Who’s Afraid of Virginia Woolf-ish gentil sit-down between two well-dressed and well-mannered couples, and with smart editing and sophisticated structure, it skillfully reveals the violent underpinnings to this story. The film’s layers and complexity make it engrossing. I also will say here that the performances are all stellar, including the other two leads, Steve Coogan and Rebecca Hall. And the cinematography is top-notch, which adds to the startling revelations and juxtaposition of civility and brutality.

This may be the most thoughtful of these violent-young-men movies, with a serious and nuanced nod to the challenges of mental illness. But that mental illness does not belong to the violent young man whose horrific actions are at the center of the tale. Is the teenage son turned into a violent sociopath by his father’s badly-controlled rage, despite being otherwise surrounded by a supportive and nurturing family, and an especially close relationship with his mother? 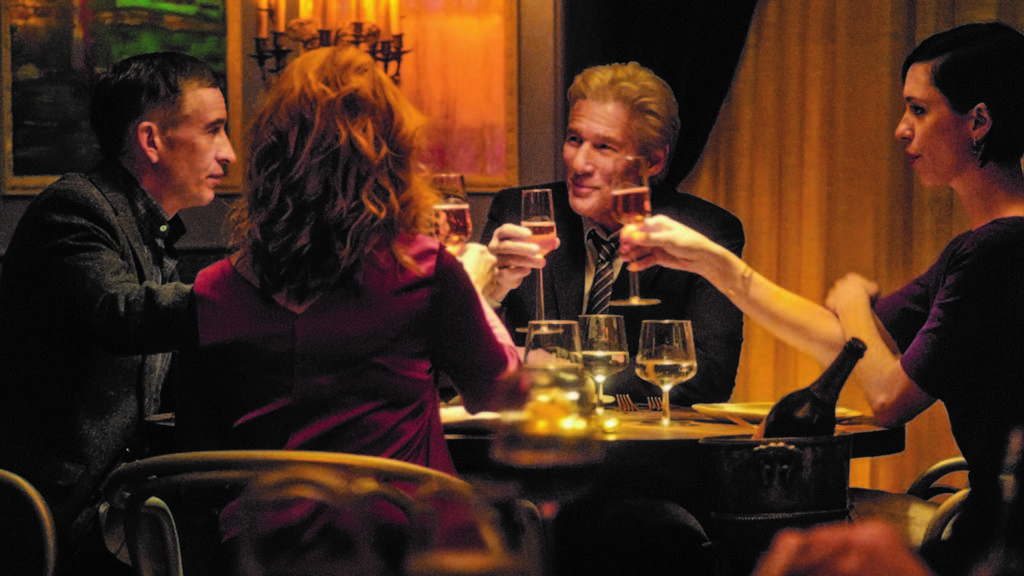 Is that really how sociopaths are built? And if not, then… what? I guess the teen boy could have inherited some mental illness from his father, but the father’s behavior is closely detailed and scrutinized, while the son shows no early signs of imbalance – until this one spectacular act of terror. I left thinking that was the weak point of an otherwise intelligent movie. Maybe I am underestimating the suddenness with which severe mental illness can manifest. But the movie does not fill in the blanks, so I am left to contemplate just another brutal teenage boy.

FYI, it is no spoiler to tell that there is deadly violence in this film, because the true story is about if/why/how the parents will deal with it and/or cover it up. This is not an original idea. We have seen the likes of it before in films such as The Deep End, where a mother and/or father struggle with the moral issues involved in parenting a murderer. Still, Helen does recommend this film (leaving out the Highly), if you are in the mood for a literate and complex family-drama / crime-thriller.

BUT: Back to my larger topic. That’s one violent-boy-culture movie. Now the next:

Sweet Virginia: This movie is as thoughtless and superficial as The Dinner is layered and complex. As I said in my mini-review, Director Jamie M. Dagg delivers a Cohen-Brothers-wanna-be movie that fails miserably (and I mean miserably literally – wretched to sit through). I don’t care about any of the characters, and Christopher Abbott is no Javier Bardem. Calling the pacing lethargic is kind. And the lighting is bad too (annoyingly dark, since I guess the filmmakers couldn’t manage to portray emotional darkness). 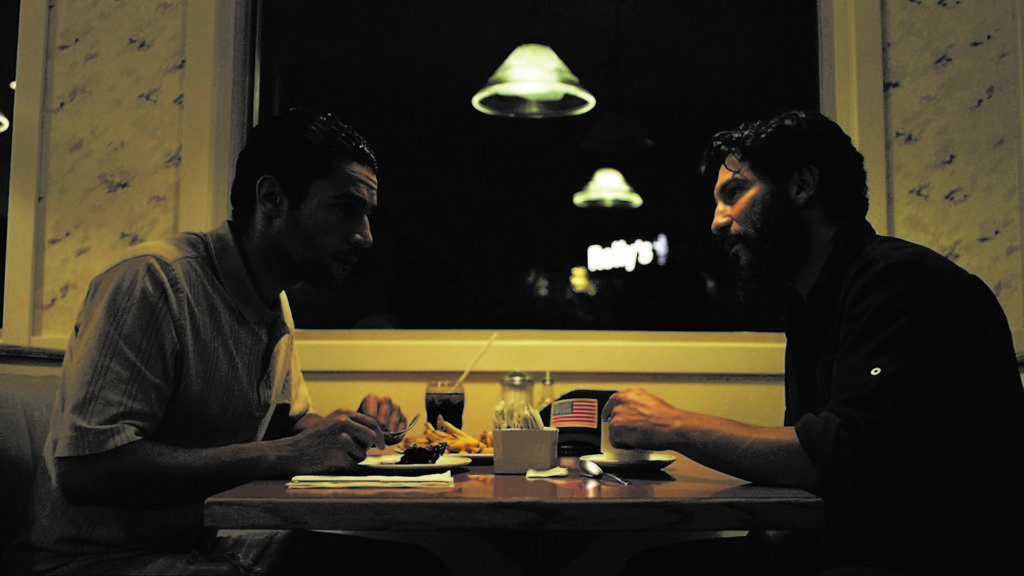 The odd thing is that this movie does take time, during its dull and sluggish storyline, to give us some specific detail about the predator – his father, his mother, his personal troubles and dreams. And it still adds up to a big, empty nothing. And at some point it is suggested that all that info was false anyway. No insight. No appeal. Just a young guy with a gun who cares not who he kills or why. The epitome of Violent Boy Culture.

Unfortunately, when I watched this film, I was not able to obtain my always-preferred end-seat, so I was stuck in the middle and therefore trapped; I had to sit this movie all the way through. Otherwise, I would have bailed by the halfway mark. Helen Highly recommends that, if you go, you have a good escape route.

Super Dark Times: There seems to be something inherently menacing about teenage boys – rural-suburban teenage boys in particular. In the opening scenes of this movie, directed by Kevin Phillips, we see our key players demonstrate how over-sexed, aggressive, uneducated, bored, and rude they are. They have a callous curiosity about death. I guess these are the type who kill cats for fun. But these boys don’t do that; they kill people instead – “friends” in fact. It starts out as a single-death accident that they decide for-no-good-reason-other-than-stupidity to cover up. Then things get out of control.

Actually, this film could have been a sensitive coming-of-age tragedy. The young actors are quite good and there are inklings of emotional depth. But the filmmakers went for the thrills and gore instead. There is no apparent rhyme or reason. This serial killer is just… another kid next door who develops a taste for blood. It’s dark times; get ready for the end of the world. I would call this genre a 90’s chiller. 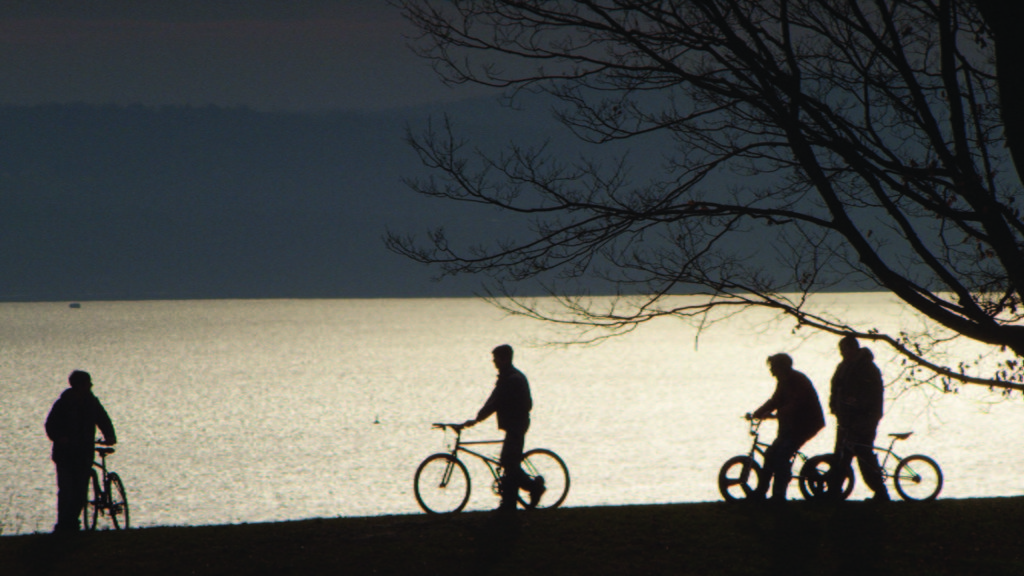 And, now that I think about it, the movie starts with … I think… an enormous, bloody and dying moose sprawled out on a classroom floor at middle school. The way the director shows it, we first see a vague bloody carcass on the school floor (can’t tell what it is and assume it’s a person), with police and students gathered around, in horror. This raises to mind the mass shootings around the country at numerous schools… an association that is brought to the audience’s mind and then discarded and totally ignored for the rest of the film. We never see or hear of that moose ever again. Kevin Phillips, please meet Anton Checkov (re gun in the first act).

And finally: A Gray State, a documentary directed by Erik Nelson and executive produced by Werner Herzog. This is a completely fascinating film and astoundingly true tale that takes you on a wild ride with surprising twists and turns, even if you already read about this story in the news. In 2010 David Crowley, an Iraq veteran, aspiring filmmaker and charismatic up-and-coming voice in fringe politics, began production on his fictional film Gray State. Set in a dystopian near-future where civil liberties are trampled by an unrestrained federal government, the film’s crowd-funded trailer was enthusiastically received by the burgeoning online community of Libertarians, Tea Party activists and members of the nascent alt-right. In January of 2015, Crowley was found dead with his family in their Minnesota home. Their shocking deaths quickly become a cause célèbre for conspiracy theorists who speculate that Crowley was assassinated by a shadowy government concerned about a film and filmmaker that was getting too close to the truth about their aims.

The documentary carries appropriately weighty seriousness, but it also shrewdly includes a touch of macabre humor – a kind of delightful brutality, which illustrates a component of this violent-young-men mentality. The movie is meticulously thorough and fully investigates the why and what and how of the story (which is perhaps a conspiracy wrapped in an enigma). It’s a film within a film, a documentary with a thriller structure, which I love, when it’s done right, which it is here. I won’t get into the quicksand of outlining the plot, but I will mention that it also takes place in American, middle-class, suburbia, with nice homes, in a Minnesota town actually called Apple Valley. 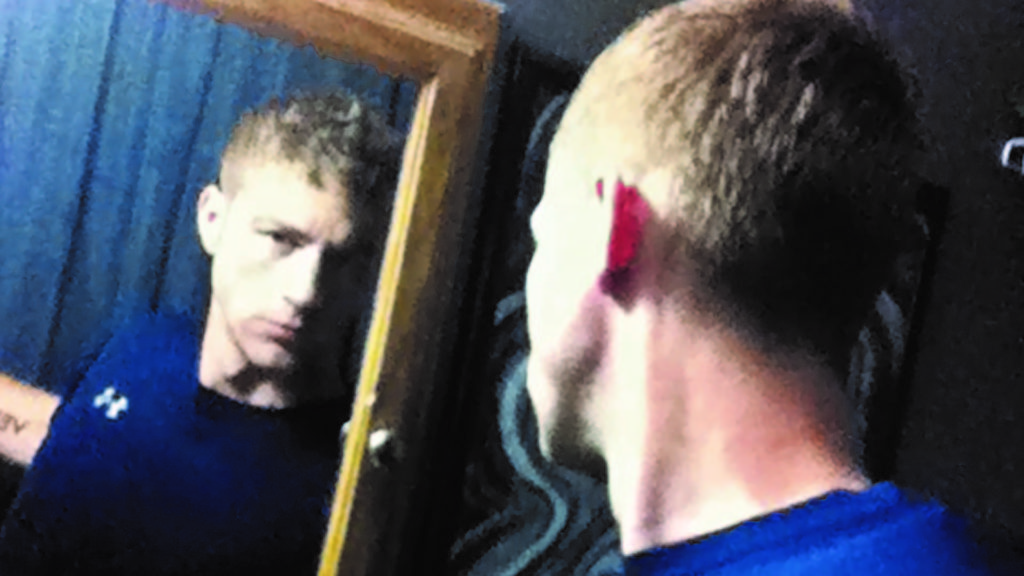 And whatever way you look at it (and the film offers a range of mind-boggling and emotionally charged perspectives) … no matter the tragically true earnestness of the film, it ends with a double-murder-suicide by a young man. It’s a thoughtful film that addresses the Violent Boy Culture head on, at the least, and goes well beyond to explore the glamorization of the military, especially to boys, and the paranoid “they’re coming to get you” belief system that has run rampant in this country. Click here to watch the infamous trailer to the film within the film, which had a seductive appeal to many other violent young men.

The documentary also suggests legitimate mental illness as a possible contributing factor to Crowley’s bloody end (although… not every mentally ill teen necessarily turns into a killer). But if you really want to consider what is wrong with our young men, this is a good movie to see. And it’s easy and fairly entertaining to watch.

Click below to watch the “viral” trailer that attracted so many military-obsessed young men:

I have not seen all the films at Tribeca this year, and not even read about all of them, so there are likely even more than these few films that are based on Young Male Predators. In fact, there is one in particular that I can think of, which definitely fits this “genre” of Violent Young Men in new American films, but I don’t want to give a spoiler by revealing that the male lead is a killer. But let’s just say… yet another thriller with a young male killer (this time with religious undertones). But, it feels like I see one of these Violent-Young-Men movies every day, and I’m sure it says something sad and dangerous about American society. I can only add, that by my count, there are even more films this year about young heroism (in societies not-American). Unfortunately, it’s the spooky movies that follow you home and haunt you.